The two professors attended the Group Meeting with Prof. Xiuxin Deng, the president of HZAU, and about 40 foreign guests from Australia, Egypt, Pakistan, USA, UK and other countries in the morning at the International Academic Exchanges Center.

After having talks with them, the KUGSA delegates were present at the Ceremony for the 120th anniversary in the gymnasium packed with faculties, staff, students, graduates and guests including a lot of leading Chinese academicians and two Nobel laureates.

The keynote speech of Prof. Nawata, titled “Recent development of Kyoto University under the “Window” policy”, was delivered in the International Top-level Forum on Engineering Science and Technology Development Strategy in the afternoon. One of the other keynote speakers was Prof. Johann Deisenhofer, the Nobel laureate.

Before the forum, Prof. Nawata and Prof. Tao had an individual meeting with Prof. Deng and exchanged gifts in a reception room.

In the evening, participants enjoyed a series of entertainment such as a torch parade and singings by students and graduates in a square on school premises.

The campus was filled with a festive mood until late at night.

Through meetings with presidents and deans of participant universities in the field of agriculture during the celebrations, the KUGSA delegates strengthened relationships with HZAU and expanded networks with other Chinese and foreign universities.

Presentation of Gift to President Deng 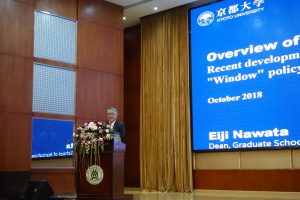